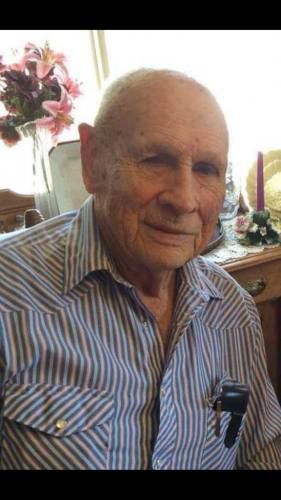 FALMOUTH — Lloyd John Hill, age 98, of Falmouth passed away on January 8, 2020 at his home surrounded by his family.

Lloyd had worked as a meat cutter and butcher for years and worked more than 30 years for General Motors in their Chevrolet Plant as a press operator on valves. He enjoyed woodworking and built beautiful furniture, hunting, fishing, setting up at flea markets. When he quit setting up at the markets, he opened the Barn and sold antiques and junk. He was a champion at playing horse shoes, played golf, and bowled on Bowling Leagues. Lloyd’s favorite card game was Pinnacle and working on crossword puzzles, he loved to travel and pick mushrooms, but the most important thing he did was spending time with his loved ones.

The family would like to give a special thank you to Anita, Erin, Rev. Walter Ross, Katy, and all the rest of the people from Hospice of Michigan who helped out. You are all wonderful.

He is survived by his wife, Norma Jean Hill of Falmouth; children, Mike (Cheryl) Hill and Linda Tyler, both of Falmouth; and a daughter-in-law, Mary Beth Bazuin Hill of McBain. There are four grandchildren and eight great-grandchildren also surviving.

There are no services planned and burial will take place in the Holland Township East Cemetery. Memorials may be made to the St. Jude’s Children Hospital and Hospice of Michigan. Funeral arrangements were made by the Burkholder Family Funeral Home in McBain and thoughts and prayers may be left at www.burkholderfamilyfuneralhome.com.