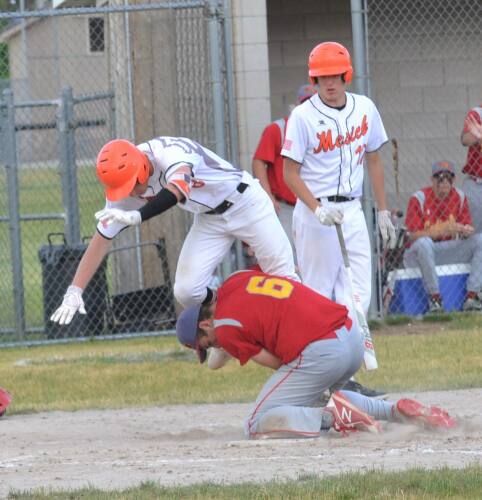 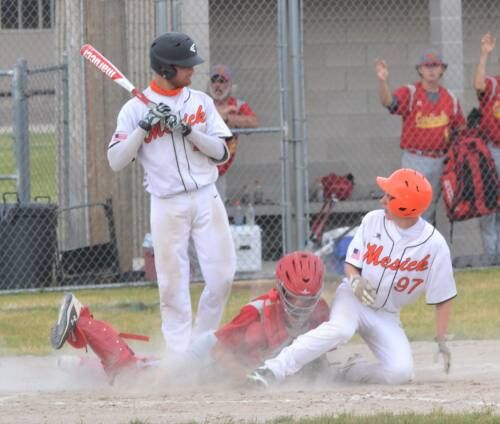 Caleb Linna of Mesick has just stolen home and looks up at the home plate umpire to verify that he slid in safely in the sixth inning of Tuesday\'s D4 regional clash with Mason County Eastern. photo by Mike Dunn 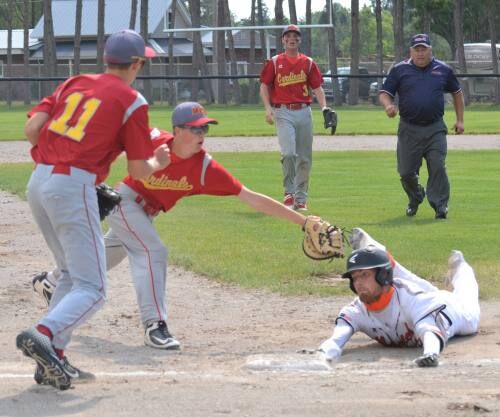 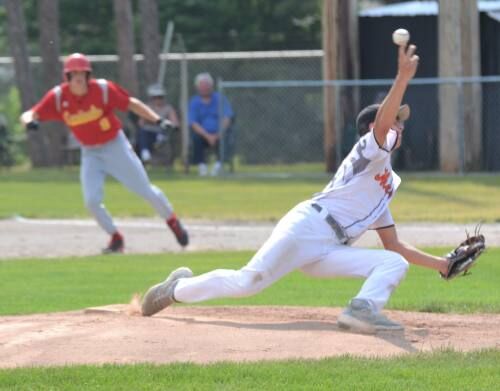 Mesick starting pitcher Connor Simmer makes his delivery in the third inning of Tuesday\'s D4 regional clash with Mason County Eastern as a Cardinal runner takes off for second. photo by Mike Dunn

Caleb Linna of Mesick has just stolen home and looks up at the home plate umpire to verify that he slid in safely in the sixth inning of Tuesday\'s D4 regional clash with Mason County Eastern. photo by Mike Dunn

Mesick starting pitcher Connor Simmer makes his delivery in the third inning of Tuesday\'s D4 regional clash with Mason County Eastern as a Cardinal runner takes off for second. photo by Mike Dunn

MESICK — It took two days and a late explosion of runs but the Mesick baseball team accomplished its objective.

The Bulldogs pulled away in the final two innings under sunny skies Thursday to turn a competitive game into a rout, defeating familiar foe Mason County Eastern 18-3 in an MHSAA Division 4 regional semifinal contest.

The Bulldogs (25-7-3) advance to Saturday’s super regional tournament at Clare, taking on Saginaw Michigan Lutheran Seminary at 12:30 p.m. in a regional title game. The winner advances to the state quarterfinal game against Muskegon Catholic or Marlette, who meet in the other final at 10 a.m.

The game with Mason County Eastern, which is also a member of the West Michigan D Conference, started Wednesday but had to be postponed 24 hours after just an inning-and-a-half because of a sudden deluge. It picked up Thursday in the bottom of the second with the Cardinals at-bat.

“This year’s group of kids have meshed together really well,‘ said jubilant Mesick coach Tim Parrish after the final out.

“We have everybody from seniors to freshmen represented on the team and they act like brothers. I think they recognized the opportunity that was in front of them after winning districts and they responded. The bats finally came together today and we played pretty good defense behind our pitchers.‘

The Cardinals scored a run in their half of the second inning to tie the score at 1 and that’s how it remained until the top of the fourth when Mesick senior catcher Gabe Parrish doubled, stole third base after eluding the tag in a rundown, and then scored on a wild pitch to give the Bulldogs a narrow 2-1 lead.

The Bulldogs made it 5-1 in the top of the fifth on the strength of a two-out bases-loaded double off the bat of third baseman Connor Sisson but the Cardinals answered back with two runs in the bottom half to trim the lead to 5-3.

Mesick made it 8-3 in the top half of the sixth when shortstop Caleb Linna doubled and scored with a daring steal of home and Collin Jewett later delivered a sacrifice fly.

When the Bulldogs came to bat in the top of the seventh still leading 8-3, there was a deluge of a different kind as they scored 10 times to remove any doubt about the outcome. The Mesick uprising was aided by eight walks as MCE coach Ward Stevers ran out of pitchers and the Cardinal hurlers had difficulty staying in the strike zone.

Cole Spencer, who was on the hill in the fourth and fifth innings and was the winning pitcher, drilled a two-run double in the frame while Sisson smoked an RBI double. Linna and first baseman Ben Parrish each lined an RBI single and Connor Simmer smacked a fielder’s choice RBI.

Senior Gabe Parrish, who started at catcher but went to the mound to record the last four outs of the game, said the mindset Thursday was “come to play Bulldog baseball.‘

“We weren’t too happy with our hitting yesterday and it took us a little while to get the bats going today but we made up for it in the end,‘ he said. “Our defense had the pitchers’ backs today and that was big too.

“We’re happy to take this next step and get to play on Saturday but we know we have to come ready from the first pitch. We can’t sit back.‘

Coach Parrish’s strategy was to limit his three primary pitchers Gabe Parrish, Simmer and Spencer to a total of 50 or less pitches so all three would be available on Saturday. Fortunately, it worked out that way.

Simmer, who started Wednesday and resumed on the bump Thursday, twirled 3.2 innings all together, striking out four and allowing three hits. He was taken out of the game after three innings but was inserted again in the sixth and recorded two more outs before his pitch count forced him out. Spencer, a sidewinder, struck out two in his two-inning stint and permitted three hits. Gabe Parrish finished up, not allowing any more runs while getting the last four outs and recording a strikeout.

“The rain storm yesterday kind of threw us out of whack with our pitch counts but we got what we were hoping for today,‘ he said. “Connor, Gabe and Cole all did a pretty good job of throwing strikes and we had some nice plays in the field behind them. The main thing is they’re all able to pitch on Saturday.‘

The shortstsop Linna made a nice running grab of a soft line drive in the fifth inning and rightfielder Brad Smith did a good job tracking down some high fly balls and also making a throw to the plate on an attempt to score. The infield did not make an error during the game.