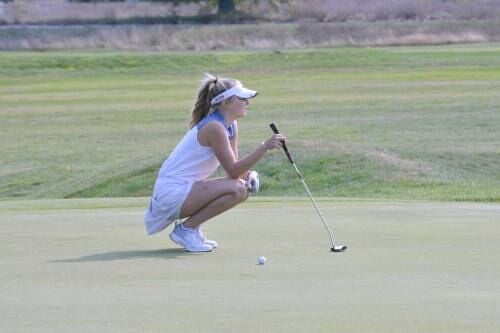 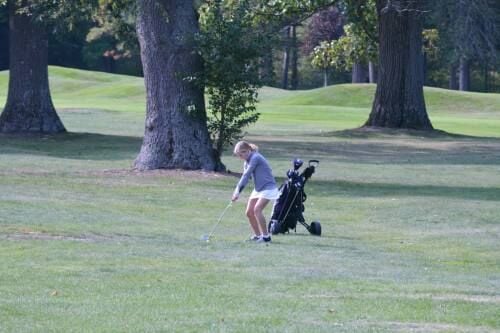 CADILLAC — Cadillac shot a team score of 391 to take fourth in its own girls golf tournament Monday at the Cadillac Country Club.

Powerhouse Traverse City West won the event with a 319, while Traverse City Central was second at 366, Petoskey third at 367 and Alpena fifth at 429.

"We will continue to compete as we go forward," Cadillac coach Brandon Bailey said. "The kids probably wanted it a little too much today. This was our first Big North match played at home and we wanted to play well.

"We are working on peaking for regionals in a few weeks and we hoped this day would give us some confidence."

"Molly really played well today and with a lot of confidence," Bailey added.

Cadillac' JV team shot a 431 to take second out of three teams.

Baily Little took fourth with a 101 while Alix Matzke was fifth with a 104. Avery Meyer and Onalee Wallis each shot a 113 while Catie Carey shot a 127 and Emily Marvin a 144.

BIG RAPIDS — Northern Michigan Christian improved to 9-1 with an 8-0 win over Big Rapids Crossroads in an NMSL contest.

"Some of our substitutes really got a lot of experience, too, and played well."

NMC is at Clare on Wednesday.

BUCKLEY — Leland scored in the first 10 minutes of the game and it held up as the Comes topped Buckley 1-0 in a Northwest Conference contest.

The Bears also had a goal called back on an offsides call late in the second half.

Buckley (9-2 overall, 2-2 Northwest) is at Kingsley on Wednesday.

LEROY — Pine River dropped an 8-0 decision to Gladwin in an NMSL contest.

FRUITPORT — Cadillac picked up a 5-3 win over Coopersville in a non-league match played at Fruitport High School.

"Today was a solid team win against a key regional opponent," Cadillac coach Matt Schaefer said. "Coopersville is a good team and I felt like we played well across our entire lineup.

"The doubles flights swept their matches and that was big for us. Now we will focus on a couple of conference opponents Petoskey and Alpena before we get into the Big North tournament and regional play."