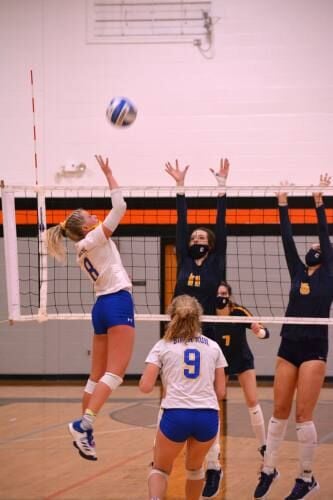 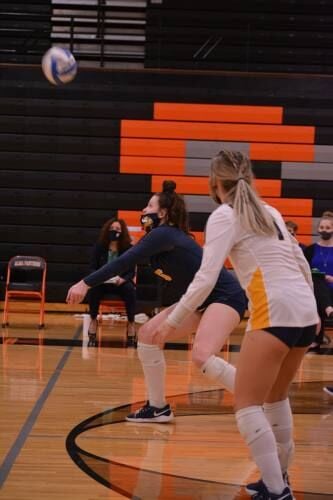 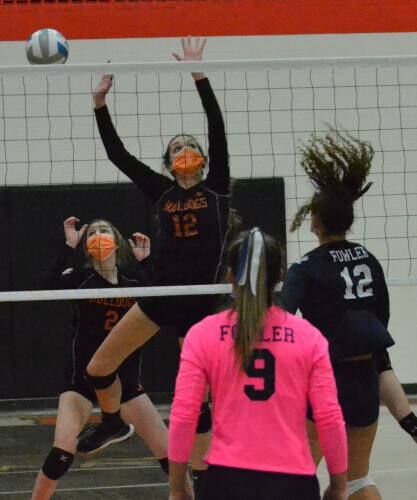 The craziness of 2020/2021 got a little crazier Tuesday night in local volleyball circles.

Cadillac dropped the first two sets and then rallied to win the final three and beat Birch Run in an MHSAA Division 2 state quarterfinal.

Not to be outdone, Mesick won the first set of a Division 4 quarterfinal against Fowler before dropping sets two and three. The Bulldogs then won set four 25-23 and set five 15-10.

While both teams were still catching their collective breaths from the victories on Wednesday, the focus turned to something even bigger.

The Vikings will face Grand Rapids Christian in a Division 2 state semifinal contest at 6:30 p.m. today at Kellogg Arena in Battle Creek.

For Cadillac, it's the first trip back to the Final Four since 2016 and the fifth of head coach Michelle Brines' 21-year career.

"I thought we played really well the second half of that match and to be off for 60 days and come back and do that is special," she said. "It's a one-day turnaround and we're still riding the high of (Tuesday night).

"We've got to refocus. We watched a little bit of tape and we'll do a walk-thought (Thursday) in our gym. What I'd like to see is my team go out there, enjoy each other and just play. We move into underdog territory now but we've played tough teams, taken sets from them and beaten them. I told them ‘why not us?’ We know this year, anything goes."

Brines thinks her team grew up a little more right before her eyes on Tuesday against Birch Run.

While the Vikings came into the season with two huge pieces in senior outside hitter Macy Brown and junior setter Renee Brines, there also were a number of question marks.

That's included a pair of sophomores in Joslyn Seeley and Layke Sims, a freshman in Carissa Musta and a handful of juniors moving up off JV.

"We've got so many young kids and I think that was a problem in the beginning of the match," Michelle Brines said. "When they finally got on the court, it was like ‘oh, no’ and then things weren't going well.

"Obviously, they grew and matured throughout the match, did their jobs and came together. It's come together and turned into a special season."

Brines knows her team is the underdog but the Vikings are pretty darn good, too.

"We're vying for a state title, too."

When it comes to the neophyte, that's Mesick's description.

The Tigers have won a record 20 state championships but haven't been back in the Final Four since 2015.

Mesick coach Stacy Quiggin was working on re-focusing her team after the thrilling win over Fowler on Tuesday and working to make sure the Bulldogs kept some of the same mentality.

"I think they're still a little shell-shocked," Quiggin said. "We're trying to prepare ourselves as best as we can but we know the arena and court are going to seem huge to these girls.

"They're super-excited for it but I know nerves are going to come into it. I just don't want them to be shell-shocked and then not play like we do."

After winning the first set against Fowler on Tuesday, Quiggin said her team got away from a lot of those things. She got that settled down for the fourth and fifth sets and it made a difference.

"If we can get into our normal style of playing quicker, that's going to be a lot better for us," she said.

Quiggin is also working to make sure players feel like they belong at this level.

Mesick won its regional by forfeit after Leland had to drop out back in November due to COVID-19 quarantine protocols. Fowler then played without five starters on Tuesday, including all-state outside hitter Sarah Veale.

Mesick can chalk it up to just being in the right position at the right time.

"They feel like they don't belong and maybe we get the feeling that we don't deserve to be there," Quiggin said. "We proved that we can hang and we can do our thing.

"We have athletic kids and we do play well together."