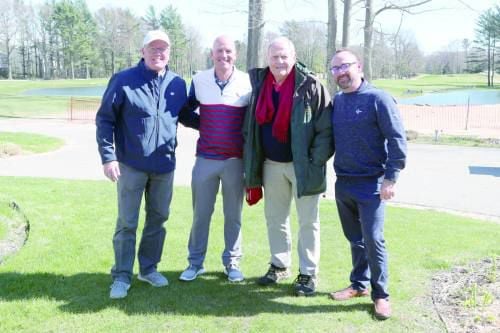 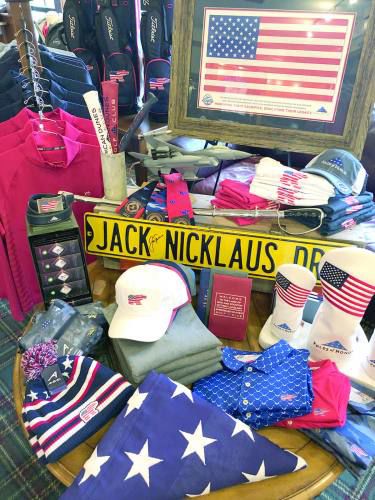 Doug Bell had all he wanted.

The Cadillac native was an integral part of a successful operation at Manistee National Golf Resort.

Bell had also worked at Eldorado Golf Course where he was given an opportunity to learn course construction techniques before it opened.

He then went to Manistee National in spring 1999 where he'd spend the next 20 years working with few thoughts of leaving.

And then he received a text message.

A text message, it turns out, that changed his life.

Rooney was an F-16 fighter pilot in the U.S. Air Force Reserves and served three tours of duty in Iraq. He's also a PGA professional and founded the national organization Folds of Honor Foundation in 2007.

Rooney, along with a group of partners, owns what is now American Dunes Golf Club in Grand Haven and it's a concept that once completed, will be unlike any other golf operation in the country.

All profits from American Dunes will go to Folds of Honor and its scholarship program.

The former Grand Haven Golf Club is being redesigned and rebuilt by Jack Nicklaus. It's believed that it will be the last course the Golden Bear will personally design after having retired three years ago from design work.

Now Bell, and Cadillac native Ian Ziska, are an integral part of it. Bell came on as general manager early last year and eventually got Ziska to join him, as well.

"Lt. Col. Rooney tasked me with putting together the best team I could," Bell said. "We're going to be a golf facility like no other and it takes good people to do that.

"When the course opens, we're going to be a safe haven for veterans and we're going to do some things differently than other courses. We're going to have times available every day for active military to play for no charge and our veterans will be able to play at the least expensive prices."

So before we get ahead of ourselves, we need to set the table will Bell's background in golf and how he became associated with Folds of Honor, something that eventually led to him being "in charge" at American Dunes and to meet one of his boyhood idols — Jack Nicklaus.

From Cadillac to Manistee

Bell grew up in Cadillac, eventually working at the Cadillac Country Club, along with winters at Caberfae Peaks.

He's a graduate of Ferris State University's PGA Golf Management program and has worked at courses around the country.

That led him to Manistee National in 1998 where he helped with the final year of construction of the courses there.

"During my time at Eldorado, I had a wonderful opportunity working with that team to get a huge education in construction," Bell said. "There wasn't any facet of the project that I didn't get my hands in. It's sure nice to be able to say I was involved from the beginning."

Bell, and Ziska — who also was part of Ferris' program — worked together at Eldorado and then Ziska went to Manistee National, as well, to become the head pro for 10 years before moving on to Katke Golf Course in Big Rapids.

Bell's military connection is an emotional one that's helped to shape his life.

"When I was in Manistee in 2000, I met a gal from Reed City named Ann Davis," he said. "She had been married and had two small children.

Both Jeff and Ann are from the Reed City area and attended Reed City High School. Davis' helicopter exploded while on a training mission, leaving Ann with a 1-year-old boy (Blake) and a 3-year-old daughter (Hannah).

Bell and Davis hit it off and they've been a family ever since.

"I am blessed to be in their family…I was divorced with no kids," Bell said. "Helping Ann raise her kids has been great.

"Our families have really meshed."

As Hannah and Blake grew up, they started working at Manistee National with Bell in nearly everything.

Hannah Davis, as the daughter of a fallen military member, received the Folds of Honor scholarship each year toward her education at Michigan State University. Blake Davis received it as well through his four years at Ferris State University, but Hannah's involvement became much, much more.

Every March, as part of the Michigan PGA Spring meeting, a Folds of Honor recipient speaks and shares their story and reason they qualify for this educational scholarship.

"Her senior year at Michigan State, Hannah was asked to speak to our membership," Bell said. "She told a wonderful story about her father and had the room pretty emotional.

"Another PGA professional then asked her to speak at a golf event at his club in Detroit, which went well."

Eventually, Folds of Honor contacted her about doing more public speaking. The big one would be an annual gala event on Memorial Day weekend in Tulsa, Oklahoma.

Hannah Davis spoke in front of around 1,000 people about her father. Afterward, Folds of Honor asked her to be on its speakers' bureau.

She's still doing that to this day while living in Greenville, South Carolina. She frequently flies around the country giving speeches to help Folds of Honor and talk about what the organization has meant to her.

That led to Hannah Davis and Lt. Col. Rooney forming a friendship. That worked into Bell and Rooney knowing of each other and what ultimately led to that text message in January 2019.

"I get a text in early January 2019 and it asks if I have an hour to discuss American Dunes?" Bell said. "I didn't know who it was from but it says ‘I want to fill you in with what we want to do to the golf club.

Bell was happy in Manistee and not necessarily looking for a change.

Bell agreed to meet with who he eventually finds out is Rooney at a golf show that winter. That meeting turned into an offer to run American Dunes for him.

"He had no idea of my background in golf course construction at that time so to come to another dirt-to-grass project kind of brings me full circle," Bell said. "I got here by the other aspects and abilities I learned in my career over 30 years but the unique tie to Folds of Honor helped.

"We made a wonderful connection. All the stars lined up and this was a great opportunity for both Ann and I to move to Grand Haven. It was kind of meant to be."

Rebuilding a course and its purpose

The former Grand Haven Golf Club, located a couple of hundred yards from Lake Michigan, wasn't doing all that well financially like a lot of courses across the country as the 1990s golf-course boom played out.

Rooney's father — Dr. John Rooney — purchased it in 1998. Dan Rooney eventually took it over and wanted to go in an entirely different direction.

"He had a vision to do something totally different and he spoke with Jack Nicklaus about that," Bell said. "Jack has always been very supportive of the Armed Forces."

As a PGA professional, Rooney helped start Patriot Golf Day, a one-weekend event where pros across the country raise funds for Folds of Honor.

Nicklaus has been the honorary chairman for Patriot Golf Day a number of times and it's through that that he and Rooney formed a relationship.

"When Dan was looking to do something different to save this course, he asked Jack if he'd come to take a look and give him his opinion.

"At the time, Jack was three years retired from designing courses but he agreed to do it. Jack and Barbara Nicklaus flew to Grand Haven and fell in love with the place."

A vision and plan for what the course would look like began to form and construction soon began.

Through the process, Nicklaus himself has made trips to Grand Haven to monitor the rebuild. That's led to Bell getting to know one of his boyhood idols a little bit more.

Yet it's what this course will stand for once it's open that means so much, much more.

"This is a massive project both on the course and with the clubhouse," Bell said. "It's really something. I've been able to turn on this other hat and help manage what this place is going to turn into and it's fantastic. The long hours of working as a golf pro mean something different now. If what we do is successful, which I believe it will be, then the long hours are helping pay for a scholarship for a young person or a spouse that had something tragic happen in their life. That will help that family keep a loved one's memory alive and honor their sacrifice. The long hours of the season's workweeks will mean something more now."

Ziska will be American Dunes' head professional and is tasked with setting up the golf operations. In addition, he is handling social media, communications and merchandising for the club.

The plan had been to open the course around the Fourth of July. Those plans have changed given design changes as well as the ongoing COVID-19 pandemic and a lot of spring rains in West Michigan.

Bell said nine holes will open around the end of August or early September with the other nine to follow in October. That will be a soft opening and a more formal Grand Opening will be held next spring.

The course itself is going to be larger than what it was as the Grand Haven Golf Club. The course will be much longer and more spacious as the natural dunes have all been exposed.

It's "everything else" that will make it something special.

"The mission is different," Bell said. "You're going to walk through an experience that tells the story of all of our military members and the history of Folds of Honor since its inception.

"You're going to play an incredible course and the clubhouse is going to be very unique…it's not just your typical golf experience. It's very patriotic and very Americana."

Bell said over the next couple of years, they'll develop programs for veterans as studies have shown golf can be beneficial for those who suffer from forms of PTSD (post-traumatic stress disorder). That work will be done in conjunction with PGA Hope, the PGA of America's program to help veterans through the sport.

Bell and Ziska look forward to welcoming friends and veterans from the Cadillac area when the course opens.