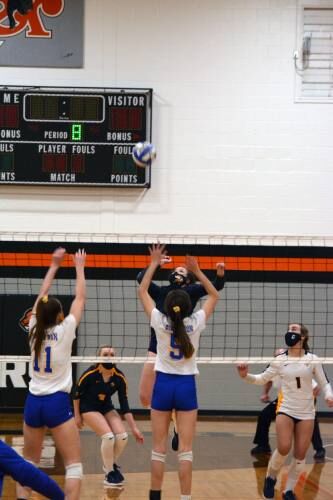 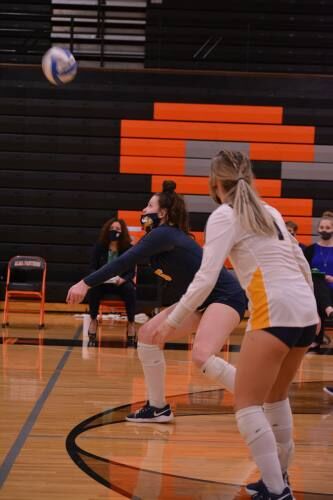 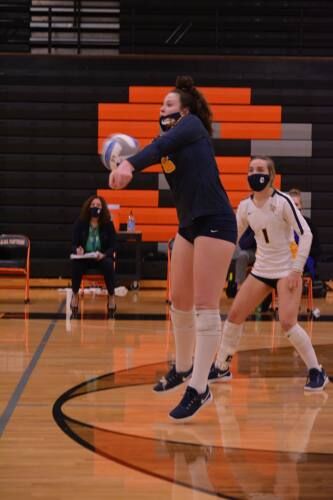 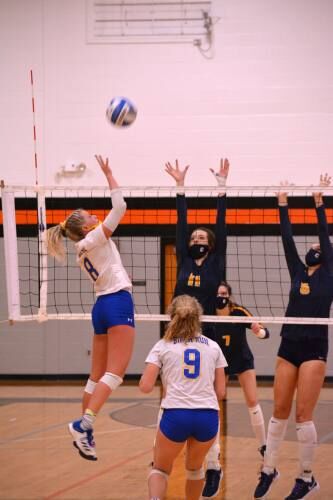 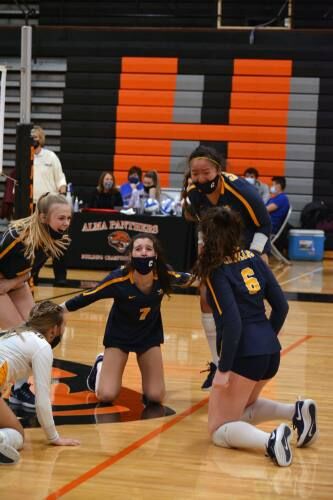 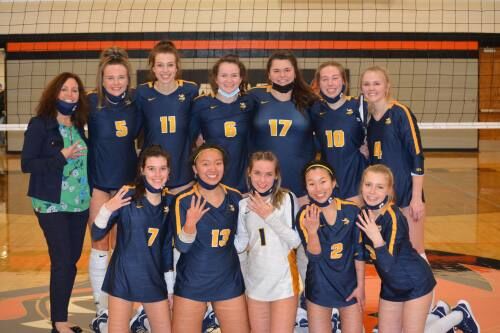 ALMA — Macy Brown has her first trip to Battle Creek.

Michelle Brines will get her new sweatshirt.

Both come thanks to one of the biggest — and craziest — comebacks in program history.

Down two sets and down in the third set, Cadillac pulled off the improbable.

The win sends Cadillac (43-5 overall) back to Battle Creek and the state semifinals for the first time since 2016. The Vikings will face powerhouse Grand Rapids Christian at 6:30 p.m. Thursday at Kellogg Arena.

Brown was on the bench as an eighth-grader and a manager with that team so this has been a long time coming.

“I haven’t been there since eighth grade when I was on the bench as a manager and so I am super-excited,‘ she said. “My freshman year, we were in the same spot. We lost the first two, won the third and then lost in four (to Fruitport).

“I didn’t want that to happen again and so I said we have to work to get this done.‘

Cadillac head coach Michelle Brines, who’s been at this for 21 years now, said this one ranks up there.

“I am speechless to a certain degree but I am so, so proud of them,‘ she said. “It was so ugly in the first two sets and it wasn’t looking good.  We were down 20-17 in the third set, but we buckled down, Brooke (Ellens) made a great play in the corner and that sparked us.

“Everyone just kind of settled down but we had put a lot of pressure on ourselves and that just shows the resiliency of these kids. That’s what they’ve had all season. I am just so proud of them. They totally earned this. We’ve had 60 days off and we had a juggled lineup. That’s probably the best comeback I’ve ever been a part of.‘

Birch Run put a big block on Brown late in the third set to go up 20-17 but Cadillac then rattled off eight straight points on kills by Brown and a tip by setter Renee Brines to finish it.

The Vikings then led most of the fourth set, going up 20-15 on a kill by Joslyn Seeley. Another kill by Cailey Masserang gave Cadillac a 23-18 lead and it ended on an error by the Panthers.

Seeley and Masserang picking up kills were huge, Michelle Brines said, because it took some of the pressure off Brown.

“We were heavy on Macy in the first two sets and I told the girls we have to help her out because she can’t carry us the whole way,‘ Brines said. “Other people stepped up and got kills.

“We locked down on defense better, too.‘

Cadillac had a less stressful fifth set as it built an 8-4 lead on a kill by Brown and went up 10-4 on another tip by Brown.

“We got out to a big lead in that fifth set and that’s so huge,‘ Brines said. “Then we basically just had to trade points with them.‘

Brown earned Cadillac’s 12th and 13th points on kills and then finished it with another attack, setting of a huge celebration that earned Brines another sweatshirt.

“I get to get a new sweatshirt,‘ she laughed. “I wore my old sweatshirt at practice (Monday). I looked at the girls and said you see this, it’s getting pretty nappy. I need a new one.

Brown paced Cadillac with 32 kills, 38 digs, two blocks and an ace while Brines dished out 41 assists, eight kills, an ace and 14 digs. Masserang had five blocks, six kills and a dig while Joslyn Seeley added seven kills and four digs.

Mady Smith had a kill, a block and a dig; Layke Sims a kill, two blocks and a dig; Julia Jezak 22 digs; Angela Mo 11 digs and Ellens 10 digs.