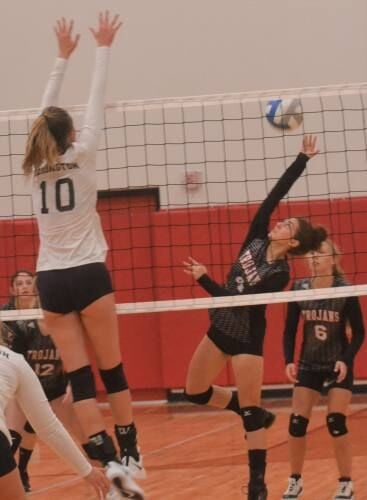 Lake City outside hitter Marisa Mangenello muscles out a hard return on Tuesday against Ludington. photo by Mike Dunn 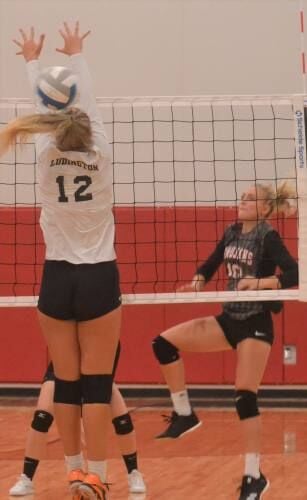 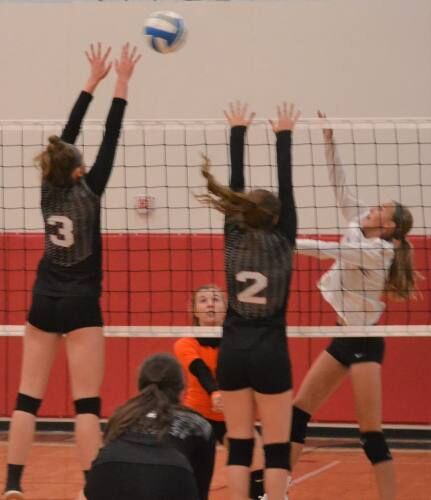 Lake City defenders Olivia Bellows, left, and Nicole Adams leap to in an attempt to block this return during the match with Ludington on Tuesday. photo by Mike Dunn 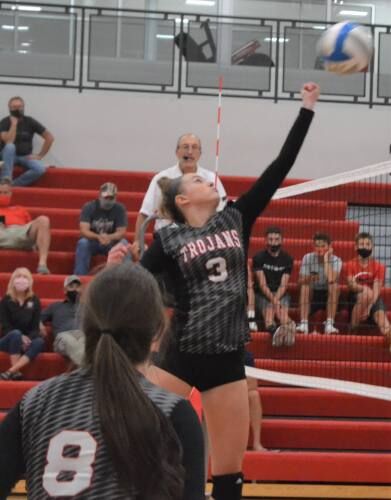 Lake City outside hitter Marisa Mangenello muscles out a hard return on Tuesday against Ludington. photo by Mike Dunn

Lake City defenders Olivia Bellows, left, and Nicole Adams leap to in an attempt to block this return during the match with Ludington on Tuesday. photo by Mike Dunn

"The scores do not show the effort and work that our team put forth tonight, especially the way this season has been so up and down," Lake City coach Bridgid Ardis said. "Moving forward with the season, we have specific skills to work on that we haven't had a chance to focus on."

Lake City served at 97 percent for the match with 54 digs and 11 kills.

MANTON — Manton swept Frankfort and Brethren in a non-league tri.

"This year our team goal is to just grow every day and I thought we did that today," Manton coach Nicole Helsel said. "We're still working through finding the right rotation and it's encouraging to see the girls working hard for each other."

Manton (3-0 overall) is at Suttons Bay on Thursday.

"We started off a bit slow and found ourselves in a bit of a hole the first game but the girls showed some grit and were able to fight back from a 12-2 deficit to rally and take that first game," McBain coach Shawn Murphy said. "I thought our serving was pretty solid across the board.

"Overall, it was a good team effort and we continue to work on specific issues with positions. I think our outsides stepped up a little tonight which was good to see."

McBain (3-3 overall) is at Kingsley today for another quad.

BUCKLEY — Buckley split a pair of matches in a non-league tri it hosted.

Buckley is at Traverse City Christian on Sept. 8.

HARBOR SPRINGS — Buckley came from behind to beat Harbor Springs 2-1 in a non-league match.

Harbor Springs led 1-0 with a goal midway through the first half before the Bears clawed their way back into it, led by seniors captains Gabe Luther and Gavin Allen.

Those two combined to tie the game before halftime and then Luther scored the eventual game-winner 10 minutes into the second half on a solo run.

KINGSLEY — Reed City scored an 8-0 win over Kingsley in a non-conference contest.

"We played our most complete soccer game of the season," Reed City coach Chris Maddox said. "We were able to get out and run and use the things we have been working on in practice.

"Passing communication and trusting one another were keys to our win."

INTERLOCHEN — Cadillac shot a team score of 391 to take fourth in the Traverse City West Invitational at Interlochen Golf Course.

The host Titans won the event with a 348 while Traverse City Central shot a 372 and Big Rapids at 374.

"This was not our best score of the year but we will regroup at practice and continue to work hard," Cadillac coach Brandon Bailey said. "These girls are not afraid to put in the extra work to improve."